So…we had to say goodbye to Opie yesterday. I want to say something like “0/5 stars, would not recommend,” but…it was time. The last couple of weeks have been rough on him, and well…like I said, it was time.

Let’s back up. We first met Opie back in 2002 when a local pet store had a bunch of shelter cats for adoption. Chandra first saw Stuart, who was screaming for freedom. She immediately wanted to take hime home. At the same time, she also spotted a little orange kitten, and he joined the family, too. What we didn’t know at the time, was that Opie was harboring some tiny bacteria that would soon wreak havoc on his digestive system. This led to him losing a dangerous amount of weight, and multiple trips to the vet. I don’t remember the entire timeline, but it took a good while for someone to figure out what was going on with him. Even when he was sick though, he still wanted to tussle with Stuart, and would paw at the paintings of kittens on the wall of the vet’s examination room. As scary as this time was, this kind of behavior gave us confidence he would pull through.

At the time, I was working from home, so I kept him company and nursed him back to health. He had a tiny plastic container we converted to a litter box, which we kept just behind my office chair in the basement. I fed him Pedialyte, encouraged him to eat as much as possible, and held him on my lap while I worked. I also cleaned that litterbox immediately after he used it, because Oh My Dear God.

Eventually, he got better and I swear overnight went from being a scrawny little kitten to *bloomp* Opie of the gooshy belly. He never got heavy exactly, but after that he always had kind of the physique of an adorable orange couch potato.

Through this, Opie and I bonded pretty closely. He preferred my lap above all others, and at night slept snuggled up against me. He slept hard, too— especially for a cat. More than once I woke up in the middle of the night convinced I had squished him, and it took a thorough toe-tickling or full body jiggling to get him to respond. As a kitten, he also had a tendency to suckle my armpit, which is where I had to draw the line. As I told him repeatedly, “Opie, that’s weird.”

Not that I was the only one Opie was close to. He and Stuart got along famously, playing and snoozing together, though Opie was never quite as into rough-housing as his brother. Back in Georgia, at dinner time the two would tear through the house, and when Opie was done with the game he would barrel under a small cabinet that was barely big enough for him. This was his timeout spot, which Stuart amazingly respected. Even later in life, the two still got into wrestling matches, though nearly always at Stuart’s instigation. Opie still put up with it, but with more of an air of resignation than full participation. They slept together less as well, but under the right circumstances could still be found sharing my lap, or at least lying in close proximity to each other, and not always just to share body warmth.

And yes, Opie liked Chandra, too, aka “Food Lady.” Frankly, he liked pretty much everyone, although it took him a long time to warm up to strangers. Until recent years, it wasn’t uncommon when we had company for him to bury himself under the covers in the middle of the bed to make an Opie lump, and he wouldn’t come out until they were gone. Once he realized that everyone had scratchies for him, he became much more open to meeting people.

A note on one of those– when Opie was in a good mood, or just making the rounds, he would bump up against everything in sight– walls, door frames, table legs, people legs, chair legs, people legs again. Sometimes he did this hard enough there would be an audible “thunk.” It was his way of telling you he was happy. One one occasion, he was sitting in a doorway, and for whatever reason, I threw up my hands in glee and shouted, “Opie!” He responded by thunking his shoulder into the doorframe.

I don’t have a lot of good photos, but here are a few of him lounging, snoozing, or asking politely if it is time for one or the other. The top photo is from a few years ago, but the rest are all from this summer. 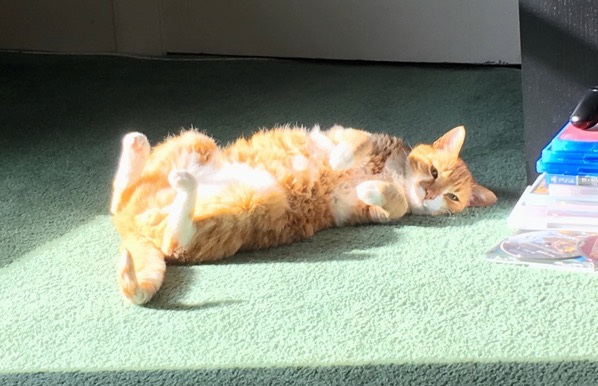 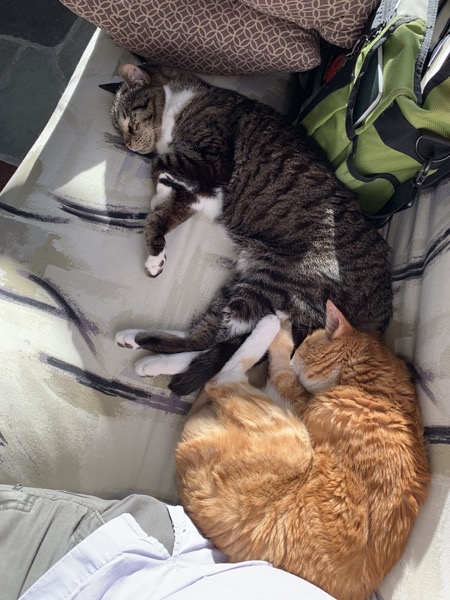 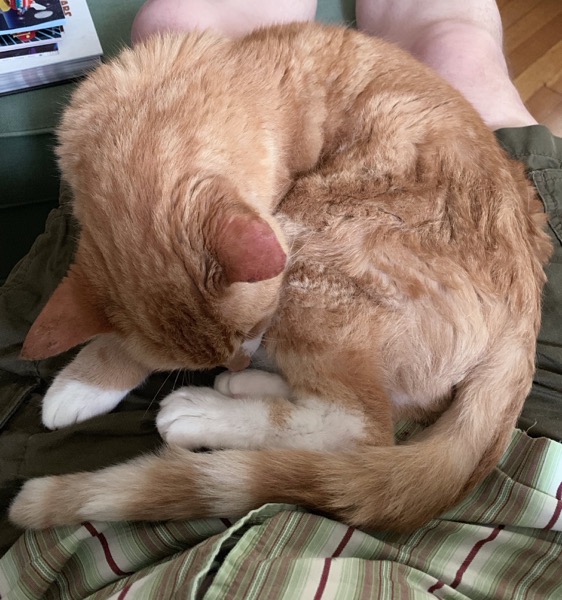 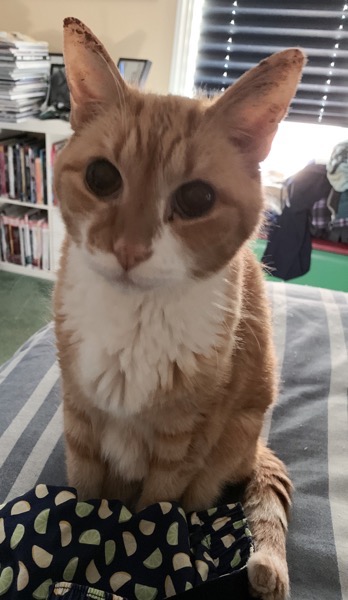