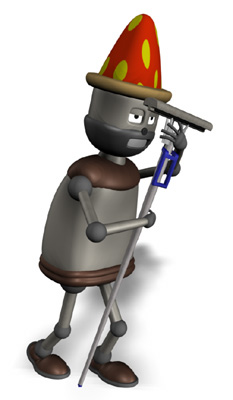 I’ve had a short burst of progress on the movie. The whole thing is at least roughly storyboarded, and I’m starting to fill in the gaps where my drawing skills have failed me (see ”
The Evaluation
“) to build a proper first draft of the movie. Since I’m using Final Cut Express and don’t have the ability to do motion keyframes there are a few segments that are going to be a little more difficult to convey without dipping into full-blown 3D animation, but I should be able to wrangle something using other software tools (Director, Toon Boom Studio, etc.).

Of course, even within a focused burst of attention there are still detours. The latest is dealing with Hotie’s mop, which plays a not-insignificant role in the flick. I had initially envisioned it as one of those classic mops with the long strands of yarn, but that was proving difficult to simulate without either spending a ton of time on it or investing in additional software that would give me proper hair simulation. So– Hotie’s going to use a sponge mop instead.

We won’t discuss the little details that have been built into said mop that will (probably) never be visible on screen.

We went out for breakfast today, and on the way out there was a protester (yes, just one) standing by the UGA Arch. He had a bunch of buttons he was passing out with messages on them like “Impeach W” and “Bush isn’t my President.” We chatted with him briefly, and each picked up an “Impeach W” button. The guy was probably in his late 40s, and while he was out there (which is more than I can say for me), he didn’t seem particularly passionate about what he was doing. I should probably have shared some of my own protest imagery to help spice things up a bit.

As I’ve noted before, I don’t have access to a render farm along the lines of what Pixar or Weta use. However, I do have a handful of computers that are capable of rendering at a reasonable speed. I’ve looked at some of the options available to me for managing rendering jobs, but they all either cost money or require enough configuration work that I haven’t been terribly enthusiastic about taking them on. So– I spent a good part of the last couple days working on a small application I’m calling “Render Garden,” that will store information about the scenes I need to render (file name, frames, output name, etc.), and ultimately either generate or run the render commands, or split up the render jobs to be run on whatever number of computers I have available to do the job. It’s probably going to be more manual labor than what an ideal system would entail, but overall I’m pleased with the app. When it’s done I’ll probably post it on the Transparent Media site.

Well, it looks like I was right about the next Supreme Court nominee. Makes me feel all squishy inside. Must be the bile.

I try not to obsess over blog readership, but the latest phenomenon has been fascinating. There are only a small handful of people who read this on a regular basis, and anyone else who comes here is typically either following a trackback link or has done a Google search and ended up here. When the whole “I’m sorry” thing popped up re: electing Dubya I got a spike from people looking for that, and a few weeks ago I got a brief spike from a Daily Kos link (not the main blog, but a comment in a discussion thread).

Over the last few weeks, however, there’s been a steady stream of people hitting this site looking for one picture in particular…wigger. Lately this one picture has been responsible for 75% or more of the total hits to this site. I find this very, very strange.

In the past I’ve posted my video work here (see “Failing the Dover Test” and “The Speech“), but I’ve decided to host my latest effort over on the transparent media site, since that gives it a more permanent home, less prone to scrolling off screen. At any rate, it’s now available, and hopefully you’ll find it reasonably entertaining.

Spent a reasonable chunk of the past weekend working on “A Civil Discussion,” in between rounds of Balla-cappin’. At this point I’m probably somewhere around 1/3 of the way done with the animation, give or take. While I’m enjoying the process, I have to say that one of the things that gets left out of all those “making of” featurettes looking at 3D animation is the fact that a good chunk of the process is just grinding through the same few seconds over and over and over while you try to get the timing and expressions just right. What’s worse is that when you’re trying to sync to an audio track you don’t have the option of cranking up iTunes while you’re working. Guh. Turns out I’m only good for a couple hours of keyframe animating before my attention wanders off.

Fortunately, there have been some opportunities for streamlining things. After doing the basic mouth animation for laughter, I was then able to write a small script to take that animation curve and create a new one for the shoulder shaking that I wanted to add. Now that was gratifying.

So apparently Bush only likes to hear good news. But then, we already knew that.

I didn’t think my cynicism dial went past 11, but I think it might now. There are apparently voter suppression efforts afoot, and they’re being funded by the Republican National Committee.

And you thought I was just being an alarmist.

The more blather there is about the “War on Terror,” the harder it is to know exactly what it means. Juan Cole has an excellent essay about this, and asks what Bush/Cheney are really fighting.

Bush and Cheney are cynically using the trauma of September 11 as a pretext to fight a series of elective wars against weak governments that are inconvenient for hawkish goals and some US corporate interests. Iraq was a poster child of this policy. It had no weapons of mass destruction, was ramshackle, and had no significant ties to terrorism. It was invented as a dire threat to Peoria by Karl Rove and Rupert Murdoch, the latter-day Wizards of Oz.

The “war on terror” of Bush-Cheney is a smokescreen for naked American imperial aggression. The sad story of how Iraq posed no threat either to the US or to any of its neighbors, despite high-decibel claims to the contrary for two years by Bush, Cheney and their acolytes, will be repeated in the case of Syria and Iran if Bush and Cheney are reelected. They hope that their project of overthrowing governments in the region will go smoothly, but they do not really care, since even an Iran and a Syria in chaos is a net gain from their point of view. Chaos creates “terror” and justifies further US involvement, aggression and control. It is inconvenient for the rest of us, but then they insist, unlike John Kerry, that we live with the nuisances they are creating.

If this was a test, this one question would be worth the whole enchilada, pass/fail. What Bush means when he talks about the “War on Terror,” is not so much stopping terror where it exists, as it is about entering a state of perpetual war with whoever looks at him sideways. That’s why he has to go.